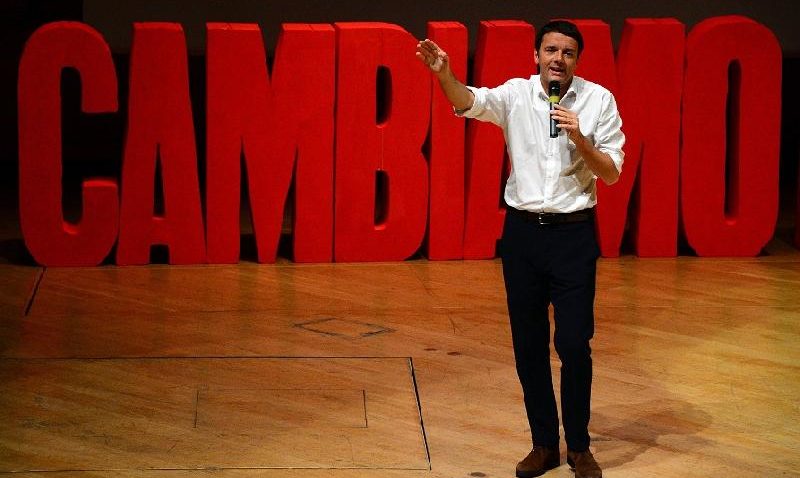 For better or worse – this only time can tell – Matteo Renzi’s figure has come to Italian politics in a quite disruptive way. After two decades in which the political debate had been entirely focused on Silvio Berlusconi’s figure and on the clear and almost unchangeable division between his supporters and detractors, the former mayor of Florence and brand new Prime Minister has brought about a quite unusual acceleration in Italian politics. This has generated resistance and critiques from a wide range of domestic actors both in the right and in the left. Most of these arguments are the result of a long period of political crystallization that has kept Italian politics in a situation of quasi paralysis.

Silvio Berlusconi represented the fundamental cleavage that structured Italian politics during the so-called Second Republic. After the fall of the Berlin wall, the classic ideological divide between left and right was mainly reframed along the figure of the Milanese billionaire. This has allowed both the left and the right to preserve their identities almost intact without really questioning their direction or leadership. To be anti-Berlusconi came to mean to be left-wing; to be pro-Berlusconi became a synonym of right-wing. The radicalism of this contrast provided the two coalitions with a high level of supposed cohesion, which largely simplified the debate and allowed parties to evade complex and potentially divisive debates concerning crucial political responsibilities.

The main consequence of this strong polarization was a sort of blockade of Italian democracy, which soon turned into a hopeless “war of attrition”. Since the possibility of striking compromises to perform fundamental institutional and economic reforms was gravely limited, left and right, by alternating in power, simply committed to doing and undoing what the others had done before. Political elites actually enjoyed this situation as the votes of reciprocal electorates were somehow guaranteed and responsibility was constantly evaded or passed to the other faction. Nevertheless, the political system resulted seriously affected in two fundamental ways: On the one hand, the slow but inexorable materialization of a dangerous distance between politics and citizens. On the other, the scant capacity of making accountable decisions with the inevitable result of exacerbating the endemic problems of Italian society: low competitiveness, public debt, corruption, unemployment…etc.

Mr. Renzi’s arrival to power has redefined the debate in a radical and unexpected way. It is not by chance that one of the most trending debates for today’s Italian public opinion is whether Renzi is left or right-wing. This should not surprise if we take into account the picture of Italian politics described in the first part. In the last 20 years, being left or right-wing in Italy used to refer to a set of sensitive, although often confused, cultural mindsets, composed of political traditions, abstract esthetics and opposing values, whose ultimate element of cohesion was constituted by being in favor or against Berlusconi. Renzi has carefully escaped this logic since the very beginning of his political trajectory. As a consequence, identities and certainties have ended up being questioned.

All of a sudden left-wing electors have to deal with a leader whose first move has been negotiating an ambitious platform of institutional reforms with Berlusconi, the long-standing enemy. Moreover, Renzi makes large use of a pop and media-oriented political style, which makes him quite different from the typical and austere Italian post-communist leader. Finally, he promises to reform the economic system without accepting vetoes from trade unions. Right-wing electors, on the other hand, found themselves with a charismatic and telegenic leader that somehow reminds them of Berlusconi. They observe with surprise that Renzi does not consider them as the unpresentable part of the country but just as ordinary citizens and even potential electors.

What emerges from these examples is the level of paralysis and mismatch of Italian political debate. Emphasizing this situation has probably been Renzi’s most important merit so far. In a way, Berlusconi’s figure exerted on Italian politics the effect of a refrigerator which maintained Italian politics virtually impermeable to change for almost two decades. Both left and right-wing stagnated around outdated historical symbolisms (communists vs. fascists), superficial cultural esthetics, and abstract values (equality vs. liberty), instead of searching for innovative paradigms to decipher the puzzle of contemporaneity.

This has been particularly evident in the left. Opposition against Berlusconi determined a significant sterilization of the dialectics internal to the progressive area, together with a slow detachment from Italian social reality and the postponement to an undefined future of too many fundamental debates. In this context, it was possible to evade answers to essential questions such as, “how to modernize a welfare state that can be sustainable?”, “how to make Italian economy competitive without leaving aside solidarity and equality?”, “how to improve the decision-making capacity of the political system while at the same time promoting new and more effective forms of participation?” The worst mistake has been to hide all these enormous challenges behind the “bogeyman” Berlusconi and not be able to offer a viable political project, capable of finding credible answers for society.

If Italian politics wants to exit this quagmire, Renzi’s figure and proposal cannot be evaluated on the basis of nostalgic, esthetical or excessively abstract positions. The alarming problems that are affecting Italian society and the inexcusable tardiness caused by the “war of attrition” between party elites require clear and determinate decisions. In particular, for the left this means to accept Renzi’s challenge and search for a new identity. The meaning of being left-wing today is, as will be in any epoch, an endless question, a hypothesis in perennial construction. What should be clear is that Renzi’s leftism should not depend on being a staunch anti-Berlusconi activist, or strictly following the line imposed by trade unions, or mentioning Enrico Berlinguer in his speeches. Renzi should be considered left-wing if he is able to make Italy a socially fairer country and a more effective economy.